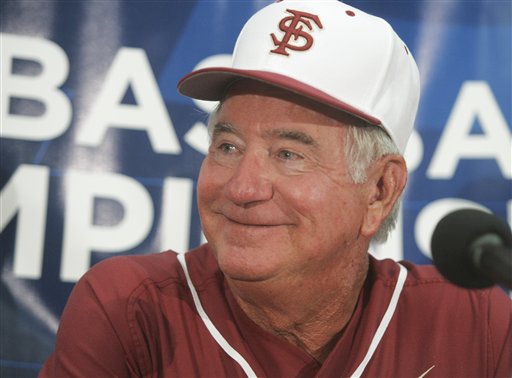 Florida State’s Mike Martin is now in his 34th season as the Seminoles’ head coach with a career that has covered five presidents and over 1,700 wins.  Martin’s 33 consecutive regional tournament appearances and 15 trips to the College World Series appearances may never be duplicated.  “11,” as he is known by most in baseball, was inducted into the American Baseball Coaches Association Hall of Fame in 2007.  He will go down as one of the most successful coaches in college baseball history-but would love to leave Omaha with a National Championship, a trophy that has eluded Martin in his career.

Inside Pitch: Do you still get the same excitement today that you did when you first broke in to coaching?

Martin: I get a huge enjoyment out of watching guys have success and with this team that we have, it’s certainly a challenge because we know we have so many young guys that are experiencing something for the first time in their life; the attention and that affects players.  As a coach you have to be sure that the young men know how to handle the attention and success but more than that, the failure.  I get a charge out of watching them get better.

Inside Pitch: Many of your players have gone on to have success in the big leagues (Buster Posey, Deion Sanders, J.D. and Stephen Drew).  Do you get the same level of satisfaction watching their success as you do guys who don’t play pro ball but are successful in life?

Martin:  I can’t tell you what enjoyment that is.  You have guys you really doubt and it happened just awhile back.  You doubted whether they would amount to anything.  They got out of school and made themselves a successful businessman.  That gives you as much as enjoyment because maybe you said something that triggered him to align himself with the right people and become a great citizen and American.

When you have a guy like Buster Posey, you know that no matter what he goes into he’s going to be a success.  He’s smart, articulate and in control of his emotions-so you really feel that no matter what you say or do with a Buster Posey, he’s going to be a success in life.  So maybe you point him in the right direction which we did.  We didn’t do anything but put him in the right place.  We didn’t have anything to do with him winning the MVP or the NL batting title, we tried to make a suggestion and have him make the decision.  That’s the way we look at it.

Inside Pitch: You’ve been to Omaha 15 times but have yet to win a College World Series title.  Is that the missing piece to your career?READ THE REST