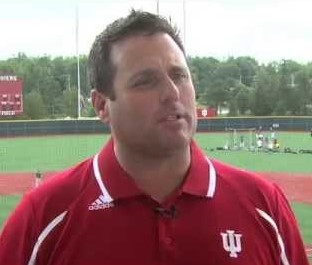 What are some of the things you’ve learned along your coaching journey that have really helped you?

Building relationships with certain coaches on your staff and even opponents over time can also really help you. Every time you’re looking to move up you need help from somebody else, it’s never just on your own. So does the success that you have. I’ve been fortunate enough to have been to two places that are highly successful, and people recognize that.

What do you look for when you’re recruiting?

My first head coach just told me to compare guys to players that you’ve played with or against. We are constantly looking at a guy and saying, you know, ‘I think he’s going to be very similar to Chris Dominguez’ or whoever we might have.

From a pitching side we like bigger guys, we like cleaner arms, and when you’re at Louisville you’re able to get more of those guys than other places. It’s helpful to just have a blueprint of sorts for our recruiting.

I think the biggest thing with our recruiting philosophy is we try to recruit when it’s uncomfortable, when it’s hard. Yesterday [on a Thursday during the season] I got up, drove 5 ½ hours, saw a game, and drove 5 ½ hours back. That’s not what a normal recruiter does. Our goal is to do what other people don’t do; in the summer and fall, everybody recruits. We try to do what other people don’t to gain an advantage.

Another thing we do offensively is READ THE REST